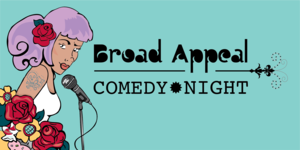 Where:
Arts at the Armory
191 Highland Ave
Somerville, MA - Massachusetts 02143

Artists, nerds, and weirdos rejoice! This show is about showcasing badass ladies with a unique point of view—and a few if our favorite dudes too, doing what they do best: making you laugh.