Braveheart: Storytelling from a Soulful Place 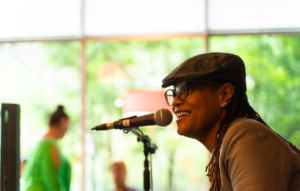 Being a woman/womyn is multi-disciplinary—requiring different roles to be adopted and hats to be worn each day. From mother and wife, to businesswoman and philanthropist, Isabella’s story and her Museum have provided multiple perspectives on the world in which we live today and imagine in the future. Listen to the interconnecting stories of poets and storytellers from across different generations and geographies who share and describe their journeys of being a woman/womyn.

Nokugcina Elsie Mhlophe was born in 1959 and is well-known for her roles as a freedom fighter, activist, actress, storyteller, poet, playwright, director, and author. Storytelling is famously a deeply traditional activity in Africa, and Gcina does it exceptionally well. She is one of the few women storytellers in a country largely dominated by men. Gcina does her most important work through charismatic performances and works to preserve storytelling as a means to keep history alive, as well as encourage South African children to read. Gcina delivers her stories in four of South Africa’s languages—English, Afrikaans, Zulu and Xhosa—which makes it possible for South Africa’s people to receive her stories in a language that can be understood by a diverse majority.

Porsha Olayiwola is the 2014 Individual World Poetry Slam Champion and 2015 National Poetry Slam Champion. Black, poet, queer-dyke, hip-hop feminist, womanist: Porsha is a native of Chicago who now resides in Boston where she organizes, writes and teaches. Porsha co-founded The House Slam, Boston’s first poetry slam venue and coaches their award winning poetry slam team. In 2018, Porsha was named by GK100 as one of Boston’s Most Influential People of Color. She is the Artistic Director at MassLEAP, a literary non-profit organization in Massachusetts serving youth artists.

A Create Well grantee, Olayiwola is releasing a choreopoem and theatrical production entitled Black & Ugly as Ever in the fall of 2018. She is an MFA Candidate at Emerson College. As an artist, Porsha writes infra-politically to tell the stories that are silenced, erased, or difficult to release from the tip of the tongue. She has a book forthcoming in 2019 with Button Poetry. Her goal is to maintain a cipher of self that is uncontrollable, undocumented and just plain ole dope.

Valerie Stephens, a native Bostonian, is an award winning, multifaceted performing artist with a passion for history. She is a recipient of a 2018 Boston City Council Resolution for her creative programming for little girls of color and her commitment to Nina Simone’s legacy, as well as a 2017 New England Foundation for the Arts Creative City Grant for creating the Elder Storytelling Performance Project.

As a vocalist, she has created four music series, the first “Women of the Village”, celebrating common voice of American, South African & Cuban women. The second “Sweet & Salty: Dressed to the Nines”, a tribute to classic Blues Singers and is currently presenting “The Music & Times of Nina Simone” and “FOUR WOMEN: Nina Simone”. Both are tribute concerts are dedicated to the world renowned musical icon Dr. Nina Simone. Her newest NINA Tribute production is "NINA SIMONE & Hip Hop" has received excellent reviews. As a storyteller, Valerie Stephens has performed throughout New England for three generations of audiences. She has been contracted to research, present and/or perform historical event productions for the Boston Children’s Museum, the Boston Museum of Fine Arts, Museum of Fine Arts, the Boston Science Museum, the Springfield Arts Museum and the Cambridge Cultural Council.

Amanda Shea is a multidisciplinary artist residing in Boston. She has performed spoken word poetry at numerous venues throughout Boston, including the Isabella Stewart Gardner Museum, Museum of Fine Arts, and the Institute of Contemporary Art. She served as an official host for the 2018 and 2019 Boston Art & Music Soul Festival and the Arts Equity Summit. She has been featured on podcasts and television broadcasts such as ItsLitBoston, Boston Come Through, and Fahrenheit TV. She serves as a radio host on Live Free or Die Radio. Shea performed at UMass Boston with The Poets' Theatre and independently for Phillis Wheatley Day. Shea performed at the Alvin Ailey Theatre with beheard.world with original pieces on racism and identity. Shea appeared in the cast of The Poets’ Theatre’s seventh revival of Boston Abolitionists, a program developed in partnership with the Boston Athenaeum. Shea later returned to the Boston Athenaeum as a curator for a performance titled, "Other Voices in the Room," which speaks to identity politics and cultural appropriation.

In February 2020, she will be going on tour for the third time, traveling to Africa. The “Awake” tour seeks to explore the role of art as both a revolutionary and spiritual tool for social justice and spiritual awakening in humans. Its goal is to utilize the tool of poetry in telling unapologetic stories of Africa while also awakening the consciousness of people through healing and love. Shea is a mother of two, an artist, and a polymath.

09/01/2020 19:00:00 09/01/2020 21:00:00 15 Braveheart: Storytelling from a Soulful Place Being a woman/womyn is multi-disciplinary—requiring different roles to be adopted and hats to be worn each day. From mother and wife, to businesswoman and philanthropist, Isabella’s story and her M... Isabella Stewart Gardner Museum, Boston, MA 02115 Organizer Organizer e-mail false DD/MM/YYYY Reddit