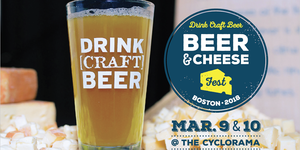 Boston Beer and Cheese Fest is back for it's fourth year! Join us March 9th and 10th to sample local craft beer, cider, cheese and charcuterie. The fest will feature:

Your ticket includes unlimited sampling of beer, cheese and charcuterie.

If you’re in the know, you realize that beer and cheese go together in ways most people wouldn’t believe…if you DON’T think that beer and cheese are a magical pairing, then the Boston Beer & Cheese Fest 2018 will be a wake-up call that you can’t miss! Last year sold out over two months in advance, so get your tickets early.

TICKETS ON SALE TUESDAY, NOVEMBER 14TH AT 10AM EST


There are no refunds OR exchanges.
All attendees must be 21+ with a valid ID. Nobody will be allowed into the building who is under 21 or who doesn't have a valid ID.
Tickets will be emailed by Eventbrite. You must bring this ticket to the event where it will be scanned.
You can transfer tickets using Eventbrite.
We give no entry guarantee if you buy your ticket from a reseller.

Why Join Us At Boston Beer & Cheese Fest?
It’s craft beer, cider and cheese…what more do you need to know?! If you do need more info, though, Boston Beer & Cheese Fest focuses on New England-made craft beers, ciders and cheeses. By attending you’ll have access to over 80 craft beers and ciders from 25 local brewers/cideries, as well as tons of cheese from 12 local creameries. If that’s not enough, we’ll be pairing a beer/cider from each brewer with a cheese from each creamery…that’s 25 beer/cider and cheese pairings! Oh yeah, and charcuterie! If that doesn’t make your mouth water, we don’t know what else to say.

How Much Does It Cost?
For only $60 you’ll get admittance to one session which includes:

Which Breweries Are Coming?
We'll have 25 NorthEast brewers and cider makers in attendance bringing 80+ beers and ciders. Some of our brewers include the following (NOTE: This is only a partial list. We'll continue to announce more of the brewers and beers in the coming weeks; Brewers and beers are subject to change and availability; All pours are 2oz or less per MA State Law):


What Creameries Will be Joining?
We’re working with local cheese experts to get a great, diverse selection of local cheeses that will pair excellently with beer and cider. Some of our creameries include the following (NOTE: This is only a partial list. We'll have 12 creameries/affineurs in total. Creameries/cheeses are subject to change and availability):

Charcuterie? What Charcuterie?!
Last year's addition of charcuterie was so popular, we're bringing it back! We'll have (subject to change and availability):