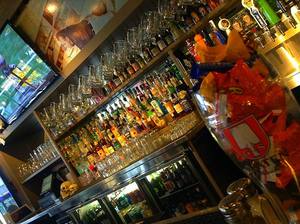 While we screens classic horror flicks on dueling HDTVs, Jack’s Abby will take over 12 of the watering hole’s draught lines to showcase a dozen picks from the Framingham-based craft microbrewery including Brewery Maker, Wet Hop Lager, Pumpkin Crop Lager, and Sibling Rye-valry, as well as rare gems from the Jack’s Abby vault.

In addition to the Buks team (of strangers) handing out candy to (adult) trick-or-treaters, chef Brian Poe will hand out some spooky beer snacks. And, as customary to dress up well in advance of the actual All Hallows Eve, there will be dueling costume contests – one judged by our staff, and the other judged by the crowd – with prizes such as a $100 gift card to Bukowski Tavern and swag from Jack’s Abby.