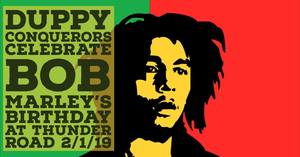 We are back at Thunder Road Music Club & Rock n' Roll Bistro for our annual gig to celebrate Bob Marley’s Birthday. This is part of our “Babylon by Pike” tour which we do every year. Thunder Road is a great venue with two levels, pool tables, a great selection of beer, wonderful food, plenty of dance floor and an awesome top-notch sound and light system. Some of the best local and national acts grace its spacious stage.

We, the Duppy Conquerors, are dedicated to the spirit of Bob Marley’s Music.

We have been making our name as the premier tribute to Bob Marley in New England. We aren’t a “tribute band” trying to look and dress like Bob Marley and The Wailers; we are musicians who respect their sound and spirit. With nearly 3/4 of their repertoire under our belts, Duppy Conquerors are the quintessential testimonial to Bob Marley.

(By the way….The Wailers first performance in the United States was in 1973 at Paul’s Mall in Boston!)

Duppy Conquerors had the pleasure of performing Bob Marley’s entire album “Kaya,” originally released on the Island Records (Tuff Gong/Universal) on its re-release date at Redstar Union in Cambridge, MA. We shared the night with our friend, music journalist Steve Morse, who wrote the liner notes for the re-release. Steve consulted with Duppy Conquerors sax player, Jeff Robinson, in preparation and quoted Jeff in the liner notes. At Redstar Union, Steve reminisced fondly about his interviews with Bob Marley. The Duppy Conquerors performed the entire “Kaya” album; portions of the show were streamed live on BobMarley.com and the Boston Globe wrote a preview about the performance. What a night!

“Bob Marley was about Spirit. His music touched many souls. It’s great to see the Duppy Conquerors capture that spirit and make it live anew. They play his songs with a beautiful conviction and love.” Steve Morse, Boston Globe Correspondent

“The crowd, equally as diverse as the band itself, enjoyed the music, dancing until the early hours of the morning and letting go of themselves to the immortal melodies of Bob Marley. After the spot-on rendition of Bob Marley’ s (album) Exodus, the band played a mixed set including hits like “ Is this Love,” “ Could you be Loved,” and “ No Woman No Cry.” Mixed in with the hits, the band played rarities like “Hammer” an electrifying rendition of “Simmer Down” that brought the entire audience to their feet, and the classic first recording of Bob Marley’ s repertoire “One Cup of Coffee.”” – Jeremy F. van der Heiden