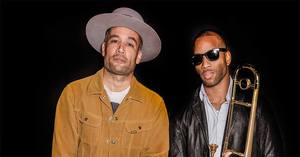 Beginning with his 1994 debut, Welcome To The Cruel World, Harper released a string of eight studio albums over a decade and a half. This extraordinary run, featuring contributions from the Innocent Criminals, established him as a singularly powerful songwriter and performer with range across multiple genres and an unmatched ability to blend the personal and political. The accolades poured in—Rolling Stone hailed his "jewels of unique and exquisitely tender rock & roll,” while Entertainment Weekly praised his "casual profundity," and Billboard said his music "reminds us of the power and beauty of simplicity." Massive, international sold-out tours, Top 10 debuts in the US, Gold and Platinum certifications overseas, and a slew of TV appearances cemented Harper and the band's status as genuine global stars.

He has gained international acclaim for his trombone and trumpet virtuosity, his songwriting and his ability to blend traditional New Orleans styles with rock, funk, soul and hip-hop. NPR hailed him as “New Orleans’ brightest new star in a generation” and his recent 2017 album, Parking Lot Symphony, was released onthe legendary Blue Note label.