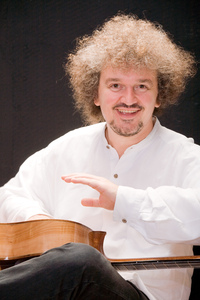 A native of Zagreb (Croatia) and born in 1969, Zoran Dukic was presented with a guitar at the early age of six. Today he is one of the most distinguished classical guitarists of our time. His performances, in recital or with an orchestra, leave long-lasting impressions on audiences and critics alike. There a unique quality in Mr. Dukić’s playing that allows the listener to experience the piece as if it was being heard for the first time, always fresh and always exciting. In the critics’ words:

“A thrilling concert… the audience was on its feet already after the first piece… a phenomenal evening” GEVELSBERGER ZEITUNG, Germany

“… after two minutes the audience was breathless,… the string genius from Zagreb showed both technical brilliance and tenderness,… with the artistic potential and expressive power of life itself,… This is a musician not a guitarist.” KÖLNISCHE RUNDSCHAU, Germany

He graduated from the Music Academy of Zagreb under the guidance of Darko Petrinjak and later completed his studies with Hubert Käppel at the Hochschule für Musik in Cologne.

In his “tour de force” competition years (1990-1997) he won virtually every prize, being the only guitarist to have won both “Andrés Segovia” competitions, in Granada and in Palma de Mallorca. Showing astounding mastery in a wide variety of musical periods and styles he also won competitions dedicated to “Fernando Sor”, “Manuel Ponce”, “Manuel de Falla”, “Francisco Tárrega” among many others. In the greatest Spanish guitar competition in Madrid, patronized by the Royal Family, he was awarded, in addition to the first prize, the special prize for the best interpretation of Spanish music (first time awarded to a non-Spaniard). In numerous competitions he was selected by the audience for the Public Prize, a self-evident testimony to his natural ability to communicate through music with any audience.

“…what a power for captivating the attention of the audience!” VIOLÃO INTERCAMBIO, Brazil

“Identifying with the very core of the piece of music and successful transmission of his own vision to the audience is a highest achievement of the concert artist. Zoran Dukic innately has these qualities.” VIJENAC, Croatia