Back to the Mixtape 2 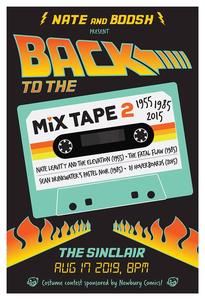 MIXTAPE — where bands pay tribute to an entire year of music — has always been a celebration of nostalgia, aiming to immerse you in (and transport you to!) a different time. Last year we went Back to the Mixtape, but getting back was only the beginning. So synchronize your watches, the future's coming back - it's time to crank the amps up to 1.21 gigawatts for BACK... TO THE MIXTAPE part 2!