All Paws on Deck! 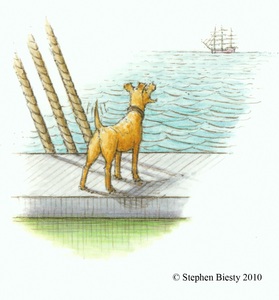 When Constitution sailed from Boston in December 1814, she carried nearly 485 sailors and one valuable new crewmember: a work dog named “Guerriere.” Guerriere quickly became part of the Constitution family and proved just how helpful he could be. The strong terrier would help the sailors during their line drills, scare the rats away from the food, and occasionally keep watch on the spar deck. Today, Guerriere the Terrier is the Museum’s mascot and helps lead visitors upstairs to the Museum’s All Hands on Deck: A Sailor’s Life for Me! exhibit.

Gather your crew together and help us celebrate Guerriere the Terrier and other working dogs this December School Vacation Week. Listen to stories of seafaring hounds, sing along to shaggy shanty tunes, and go on a quest to find Guerriere hidden around the Museum.

If you and your family would like to start the celebrations early, color and decorate a Flat Guerriere. Take pictures of him along your travels and share them with the Museum at #usscm.

*** Please note: This event is for humans only and we kindly ask your four-legged friends to “sit” and “stay” at home. ***