7 Ways to Support the Black Community in Boston Right Now 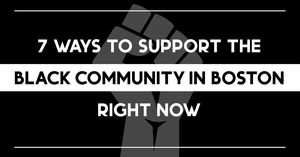 With all 50 states and at least 18 countries participating in Black Lives Matter demonstrations around the world, the New York Times has called this period in history “the biggest collective demonstration of civil unrest around state violence in our generation’s memory.” Michael "Killer Mike" Render, Run The Jewels rapper and civic leader & activist, recently addressed citizens of Atlanta, telling them to “plot, plan, strategize, organize, and mobilize.” Later, speaking on Real Time with Bill Maher, the musician explained that “protesting is the first step” for change, but "the stability comes through beating up your local ballot boxes."

Whether you’re protesting or staying inside, here’s how you can support the Black community in Boston and beyond right now.

In response to George Floyd’s murder, lawmakers are plotting action against police brutality and racial injustices at local and national levels. Lawmaking aside, many local and national publications have recently published articles aimed to educate people on racial inequality in the United States and the significance of the Black Lives Matter Movement.

• Massachusetts elected officials of color have laid out a 10-point plan with demands for police accountability and policies to advance racial justice at multiple levels of government. Federally, the plan calls on Congress to pass Ayanna Pressley’s Resolution to condemn police brutality, racial profiling and the excessive use of force. Locally, the plan calls on municipalities to declare systemic racism a public health crisis.

• WBUR has compiled a roundup of 5 podcasts to listen to if you really want to know about race in America.

• Read ‘How to Make this Moment the Turning Point for Real Change’ by President Obama here.

• Here's a list of books that can help you explain racism and protest to kids.

Raise awareness, make a contribution, volunteer, and/or lend support to one of these organizations who are fighting the good fight at local and national levels:

One way you can impact the Black community in a positive way is to support Black-owned businesses in the Boston area.

• Read this article on 18 Black-owned restaurants in Boston open for takeout or delivery.

• View this list of 60+ Black-owned restaurants in Greater Boston you can support right now, next week, next month, next year, and so on by @nailthecocktail.

• Buy books from Frugal Bookstore, the only Black-owned bookstore in Boston.

• Here’s a list of 1500+ Black-owned businesses in Greater Boston.

Below is a list of petitions that support the Black Lives Matter Movement and demand action against racial injustices.

• Sign the petition to demand justice for Ahmaud Arbery here.

• Sign the petition to demand justice for Breonna Taylor here.

• Sign the petition to demand justice for George Floyd here.

• Sign the petition for the NAACP’s social movement #WeAreDoneDying here or send a message to your Congressional representatives to demand criminal justice reform here.

• More petitions can be found at Change.org, Organize For, MoveOn, Care2.

6) OTHER WAYS TO SUPPORT THE BLACK-COMMUNITY LOCALLY

• Partake in one (or more) of the many peaceful demonstrations that are taking place in/around Boston. See a list of upcoming Black Lives Matter demonstrations in the Boston area here.

• Check out this Thrillist's article on how you can support the Black community in Boston.

• Read this article to learn about Boston-area restaurants that are running fundraisers and soliciting donations for a variety of organizations in support of the Black Lives Matter Movement.

• Educate yourself on the oldest nationally observed commemoration of the ending of slavery in the US at the MFA’s Juneteenth virtual event, ICA's Freedom Fête: A Virtual Juneteenth Celebration event. See more Juneteenth events here, here, here, and here.

Vote for people who support the Black community at local, state, and national levels. Barack Obama said in his recent Medium essay that, “… the elected officials who matter most in reforming police departments and the criminal justice system work at the state and local levels.” To confirm that you are registered to vote in the upcoming election, check your voter registration status here. If you haven't registered to vote, you can register here.