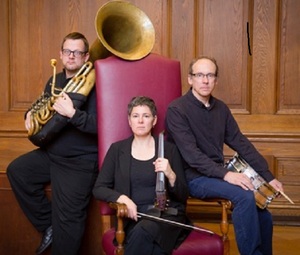 Influences for their original compositions include the likes of Hendrix, James Brown, John Lee Hooker, the Skatalites, Fela Kuti, and Nirvana. Equally at home on the stage or in a club, Triarky defies definition and labels. The trio’s massive music vocabulary is garnered from the members’ extensive experiences in world music, funk, rock and jazz.

Mimi Rabson has distinguished herself as one of Boston's most creative and versatile musicians. She is a first-prize winner of the Massachusetts Cultural Council Fellowship in composition. Her published works include arrangements of music by Duke Ellington, James Brown and Cole Porter as well as her originals. Her music and her articles frequent the pages of Strings Magazine. Her newest book for Hal Leonard/Berklee Press, Arranging for Strings was released in 2018. She co-wrote The Berklee Practice Method for violin and viola with Matt Glaser.

Ms. Rabson is spearheading the creation of a new string ensemble model for high school students that incorporates learning music by ear and instruction in improvisation, arranging and composition. It is called BREO - Berklee's Really Eclectic Orchestra.

Ms. Rabson is the leader of the Strings Theory Trio - an ensemble that explores the fine lines between compositions and improvisation.

Ms. Rabson is the newest composer/member of the Jazz Composers Alliance, a big band dedicated to the creation of new works.
Ms. Rabson created RESQ - the Really Eclectic String Quartet that plays her compositions and arrangements of jazz, funk, fusion, gospel and Latin music. That group produced two recordings

Ms. Rabson was a founding member of the Klezmer Conservatory Band

David Harris has distinguished himself on tuba, trombone, and as a composer/arranger in a multitude of musical styles. Born in University City, MO., a 1981 graduate of New England Conservatory as a classical trombonist, and a freelance-artist in the Boston area since 1980, Mr. Harris is an associate professor at Berklee College of Music in the Harmony department.
As a jazz composer, he has won the Massachusetts Cultural Council Fellowship for Music Composition 3 times, most recently in 2015. David is longtime trombonist, co-leader, and composer/arranger for the avant garde big band Jazz Composers’ Alliance. He is trombonist and tubist in the Revolutionary Snake Ensemble.
David was the founding trombonist for the Klezmer Conservatory Band, as well as trombonist/arranger for the klezmer music ensemble Shirim, noted for their “Klezmer Nutcracker” and klezmer version of Peter and the Wolf- “Pinkus and the Pig”, both of which he co-arranged.

Phil Neighbors has been playing music since his teens where he gained experience playing in shows, Dixieland groups, and German bands. Phil studied Percussion, Jazz, and Composition at Morehead State University in Kentucky. Since college, Phil has played with a host of different bands in many genres both in Cincinnati and in Boston. Since moving to Boston in 1995, he has performed and/or recorded with groups as diverse as The Revolutionary Snake Ensemble, Dave Birkin's Hot Shots, the Sam Davis group, The Coots, the Jeff Robinson Trio, and the Funky White Honkies, to name a few.

The Creative Music Series is proud to support these musicians and live music!