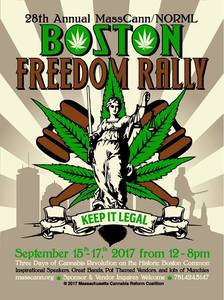 Musical acts, and special guest to be announced soon!

Although occasionally referred to as "hempfest" by some, the Boston Freedom Rally is the official name of the largest annual gathering of pro-marijuana supporters on the East Coast, and is the second largest festival of it's kind in the world, surpassed only by Seattle's Hempfest.

The rally is organized by the Massachusetts Cannabis Reform Coalition (MassCANN), the state affiliate of the National Organization for the Reform of Marijuana Laws (NORML) also known as MassCann/NORML.