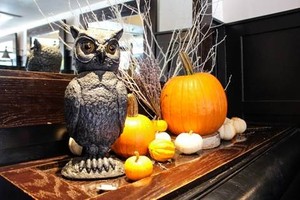 On October 27, The Independent in Somerville’s Union Square will challenge Halloween faithful to create the ultimate pumpkin art at their eleventh annual event. Hosted in anticipation of All Hallows Eve, The Indo’s Pumpkin Carving Contest will pit teams against each other to determine whose decorating skills reign supreme. The Indo will supply teams with one hollowed out pumpkin per table and the basic tools to jazz up their custom creation. Whether you opt for a traditional jack-o’-lantern theme or design an intricate spooky scene, your pumpkin will be scrutinized by The Indo staff and the winning team will receive a $40 gift certificate. After, all of the carved gourds will be put on display in the pub throughout Halloween’s long weekend creating an illuminated pumpkin patch right in Union Square. Additionally, Wachusett Brewing Company (Westminster, MA) will be on-hand with their “Pumpkan” special ale, known as “New England's first pumpkin in a can,” which they will pour directly from a pumpkin for some added flavor and fun.


Admission and entrants are complimentary. Pumpkins are supplied by The Indo on a first come, first serve basis; limit of one pumpkin per table.